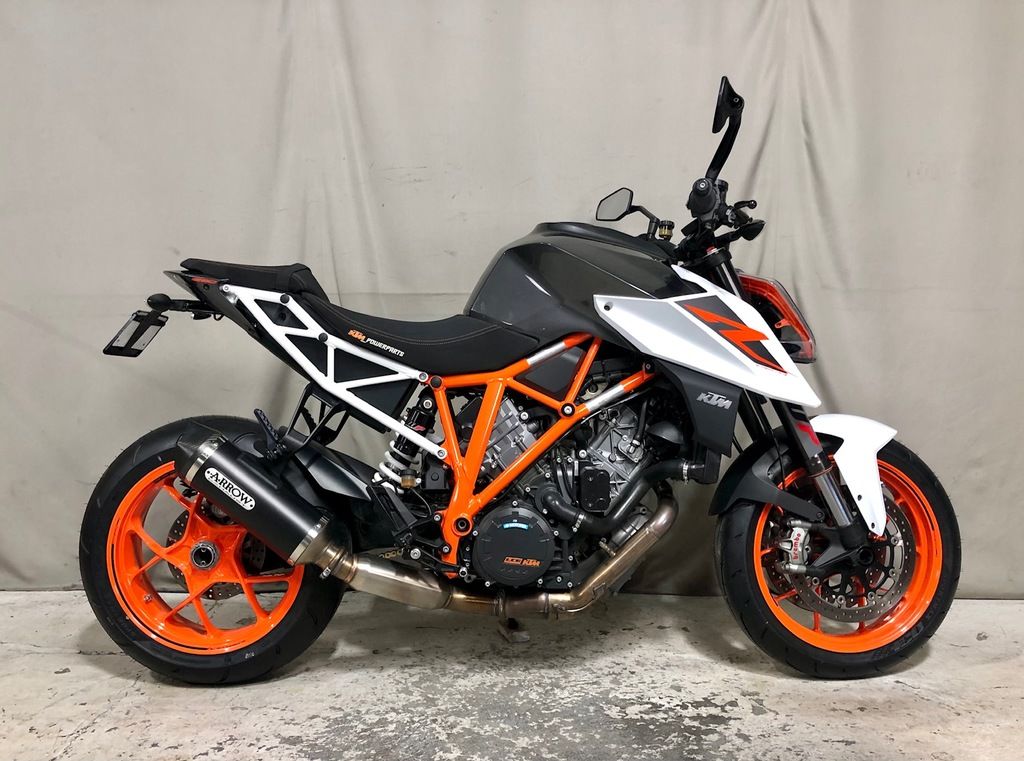 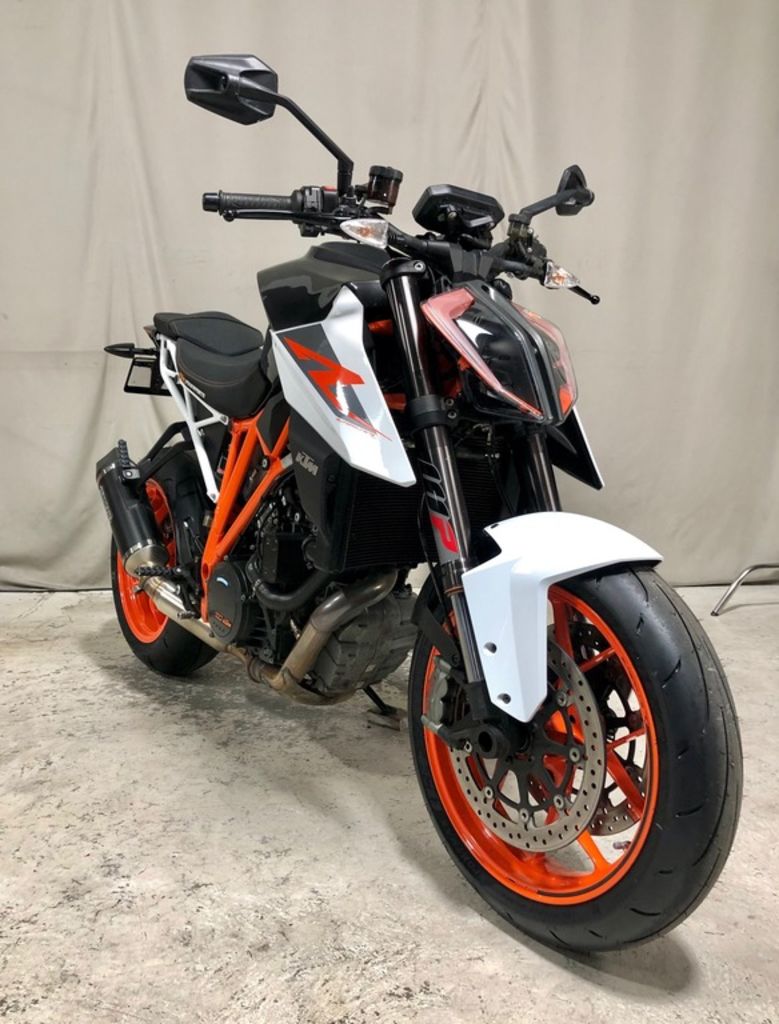 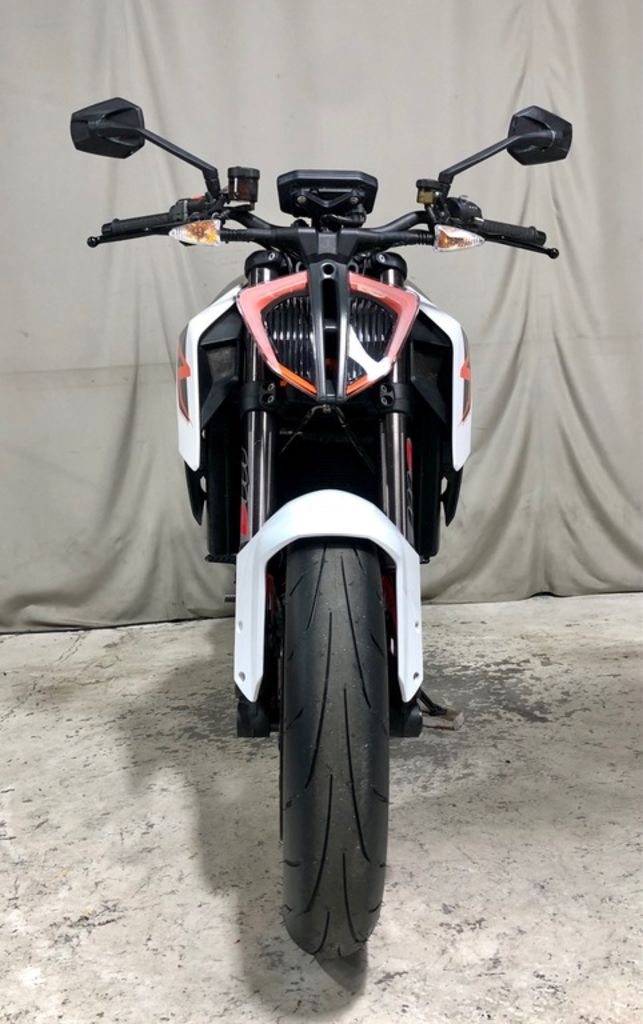 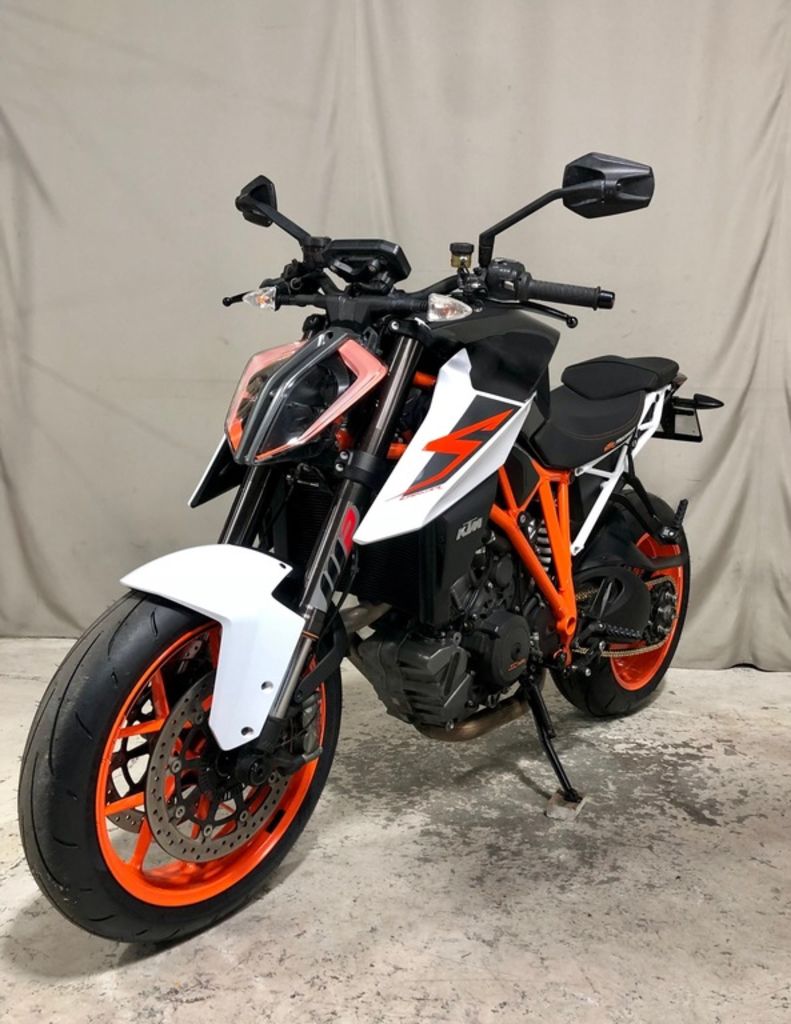 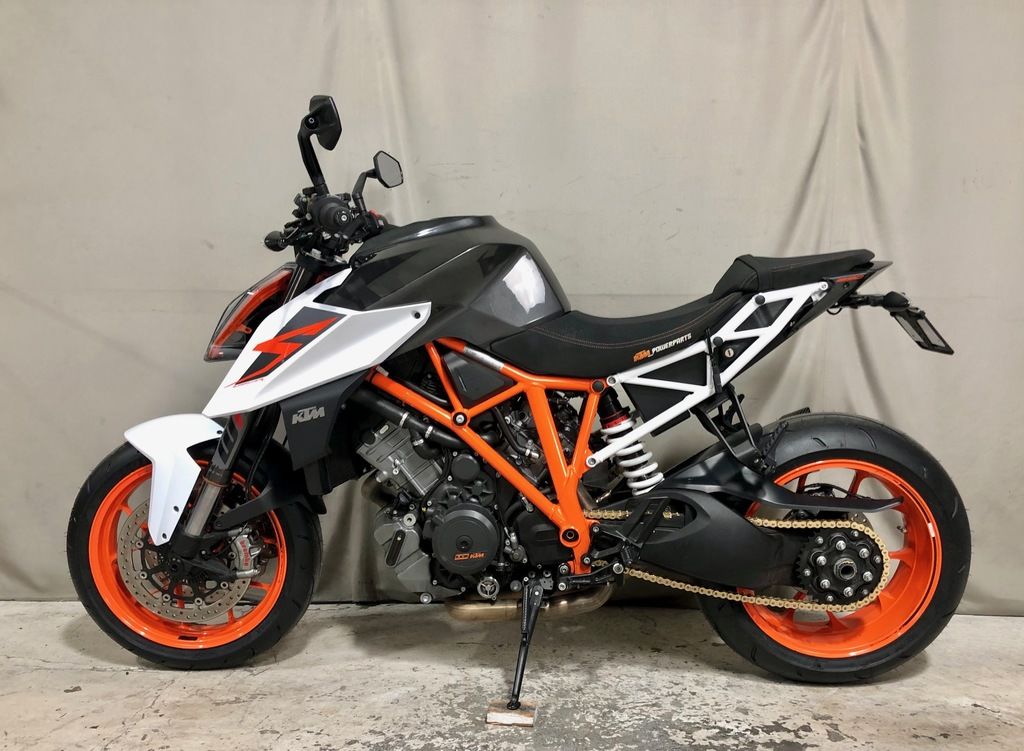 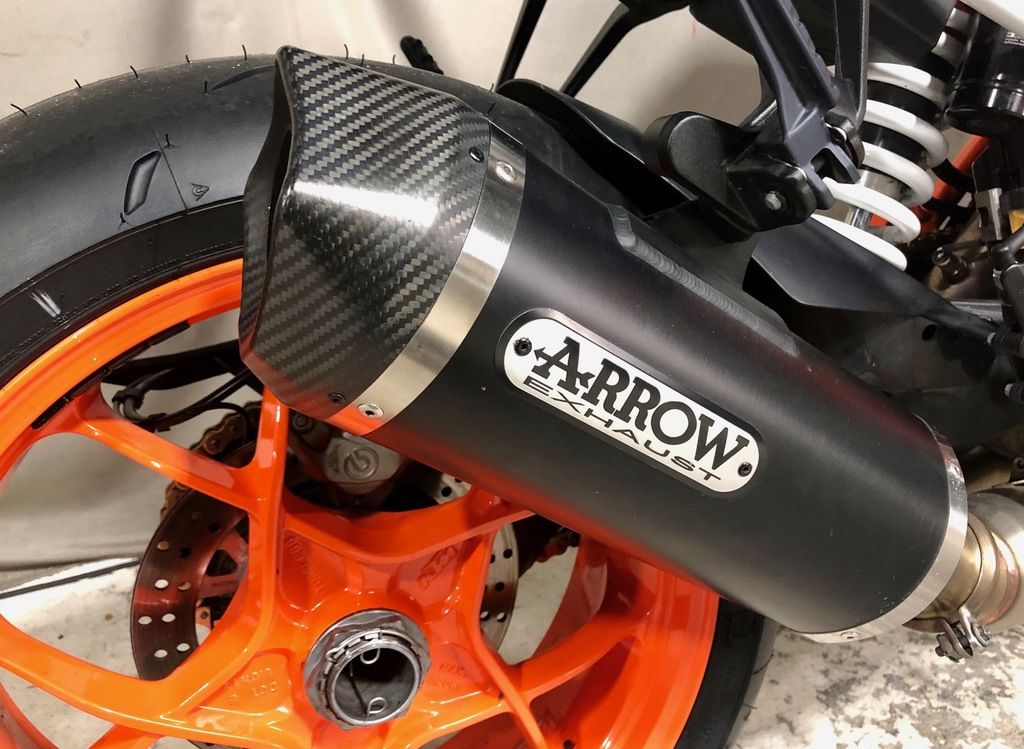 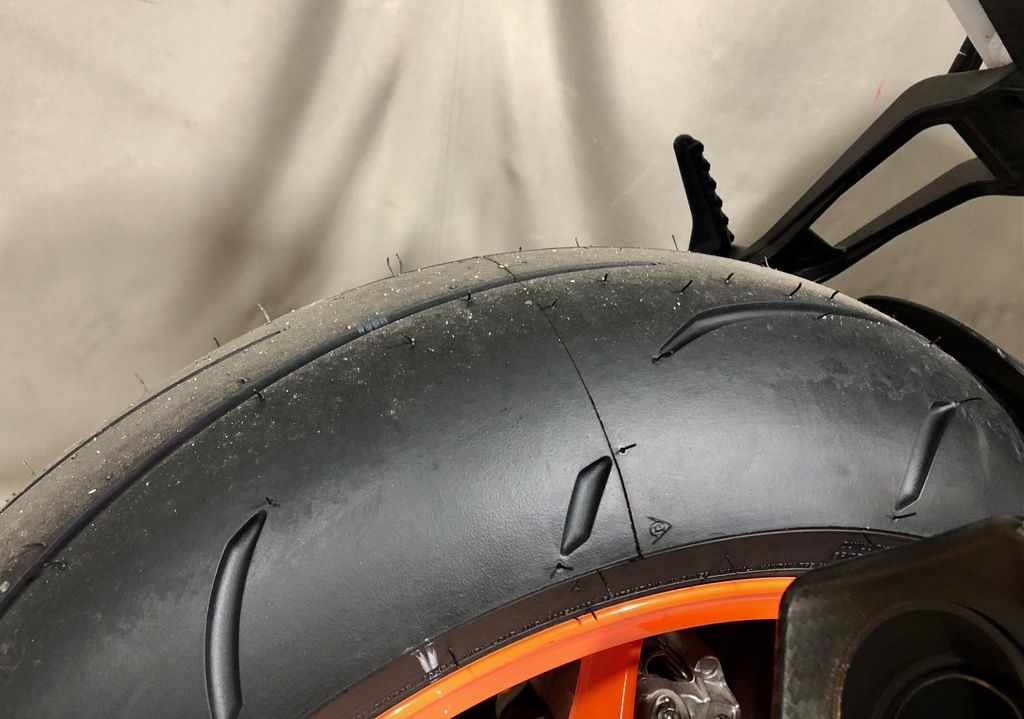 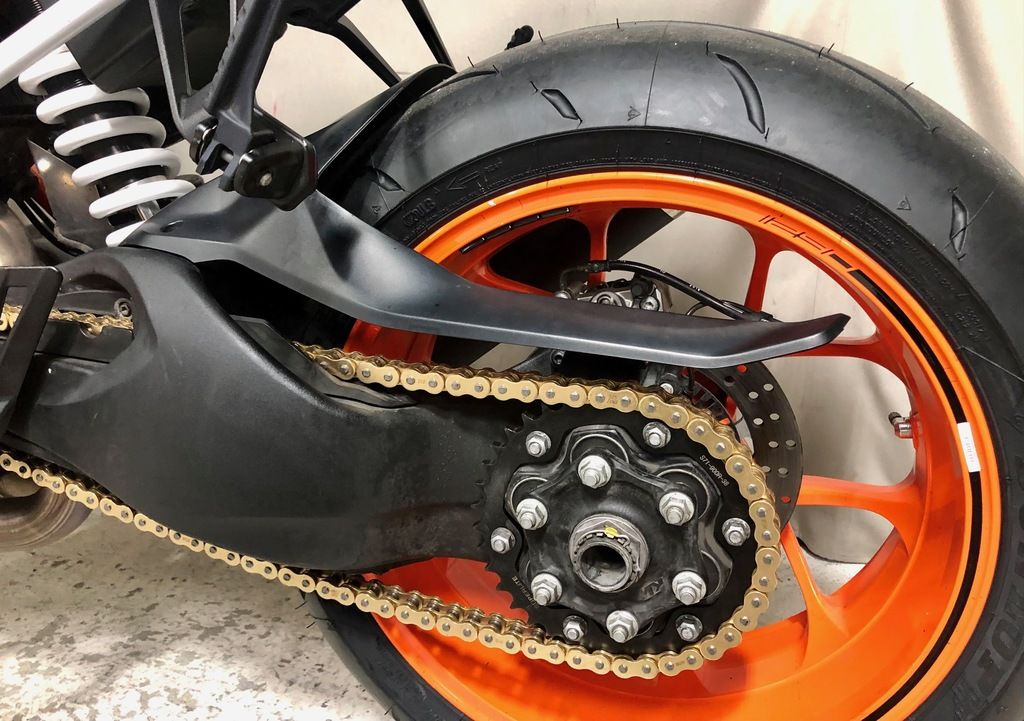 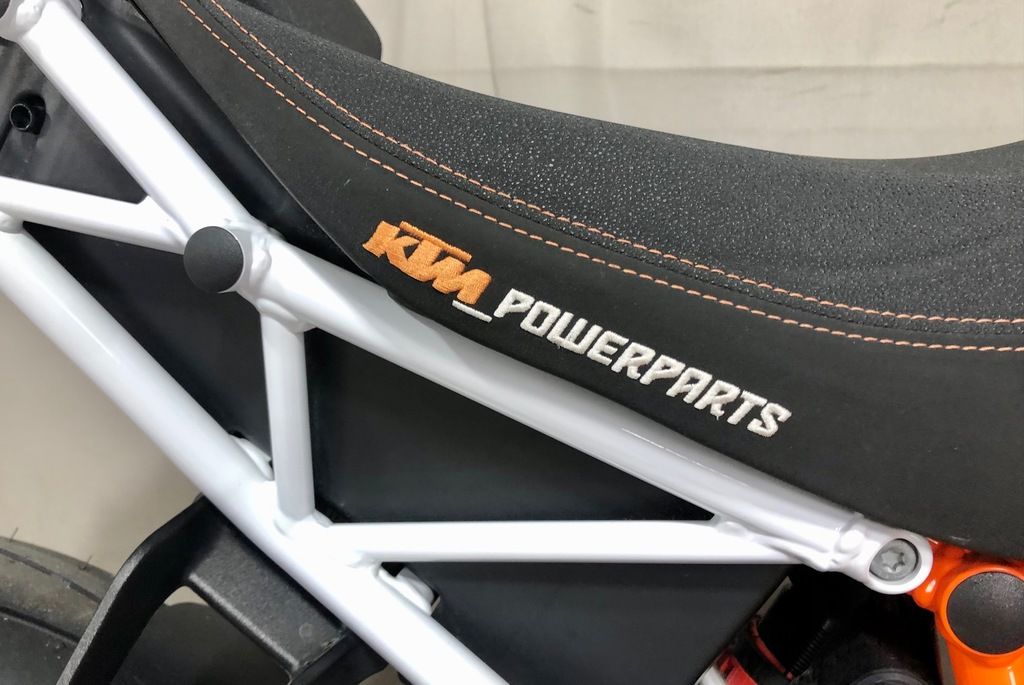 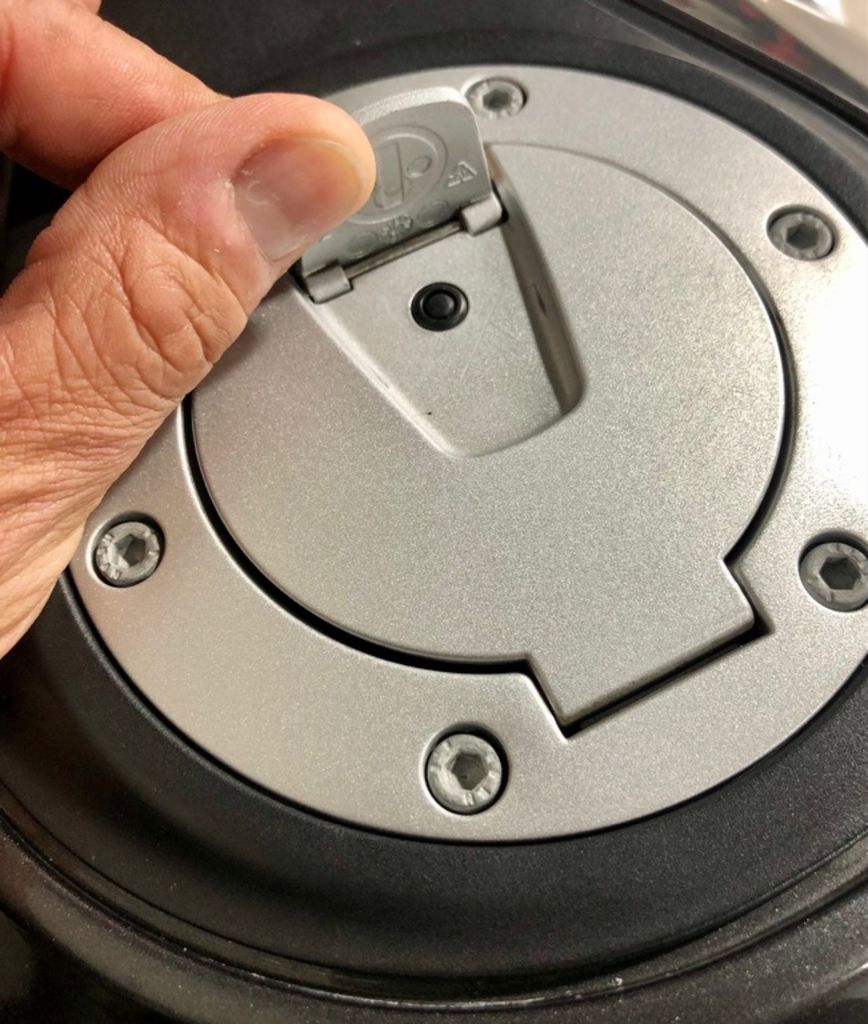 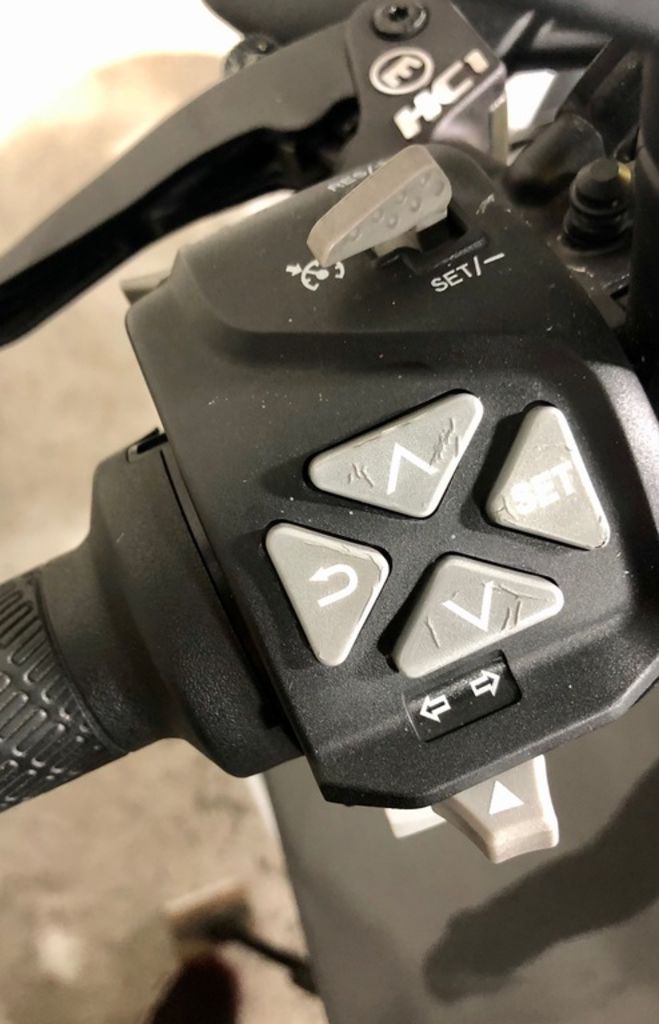 The Super Duke R is an awesome bike with lots of power and torque that wheelies everywhere Fresh tires, chain and sprockets and equipped with an Arrow exhaust.

Used bikes do not have warranty, but coverage can be purchased for additional cost.

This is our punk record - pure, raw and straight to the point: speed. Its V-twin, the most powerful one we ever muscled into a street bike, beats the battle drums at 177 hp, while its purebred chassis is set to stay ahead when the straight is devoured. When corners become prey. Even on a bad day, thanks to state-of-the-art rider assistance systems. No, scratch that. Grin amplifiers.

Fast just became faster. This engine, in its latest incarnation, pumps out an arm wrenching 177 hp while its torque figures reach for the sky between 6,750 rpm (140 Nm) and 7,000 rpm (141 Nm). So it’s stronger than ever, but we made it run smoother than ever as well thanks to overhauled resonator chambers. All in all, weighing in at around 62 kg, the extremely slim 4-valve unit is one of the lightest big twins in the world.

An intake flange is more than the plumbing that connects the throttle body to the ports in the cylinder head. It is an integral part of the induction system and has to match the airflow characteristics of the cylinder head and camshaft, as well as the displacement and rpm range of the engine. KTM developed a 10 mm shorter intake flange that perfectly caters to the engine’s needs, enhancing the power output and widening its powerband by 500 rpm. Thunder along and surf its torque or whip it hard and meet the Beast.

Another reason for the outstanding performance of the 1290 SUPER DUKE R 75° V-twin are the state-of-the-art, machined titanium inlet valves with chromium nitride PVD coating. Their flat design combined with the smaller combustion chamber now offer an increased compression ratio of 13,6:1. Interesting fact: The titanium valves only weigh 39 grams each, which is 19 grams less than the steel inlet valves we used before.

Thanks to new resonator chambers on the cylinder heads, designed to polish the torque output in the lower to mid-range rpms, the 1290 SUPER DUKE R power train runs smoother, consumes less fuel and cuts down on CO emissions by about 10%.

The KTM 1290 SUPER DUKE R’s new exhaust system is made entirely from rustproof stainless steel and is Euro 4 homologated. Hundreds of test bench runs and complex simulations ensured that the exhaust system, which uses a new exhaust flap, contributes decisively to the extremely smooth torque curve and excellent emission values of this powerful V-twin. And did we mention the sound? While it whispers at low revs, it will take your breath away reaching for the high notes.

Instead of the electronic injection systems throttle valves being controlled by cables, ride by wire generally processes throttle twist grip movements with the help of electronic sensors and activates the throttle valves accordingly using servo motors. However, our ride by wire on the KTM 1290 SUPER DUKE R goes the extra mile: It electronically translates the throttle commands of the rider into the best throttle valve positions for the current riding situation. Choking, jolting and involuntary wheelies are a thing of the past. Voluntary ones, however, could easily be a thing of your future.

Not only does the slipper clutch open when the engine back-torque becomes too high, it also assists when you open up the throttle. The former prevents destabilizing rear wheel chatter when braking sharply or decelerating; the latter reduces the hand force required for changing gear, allowing the clutch to be controlled with one trigger happy finger.